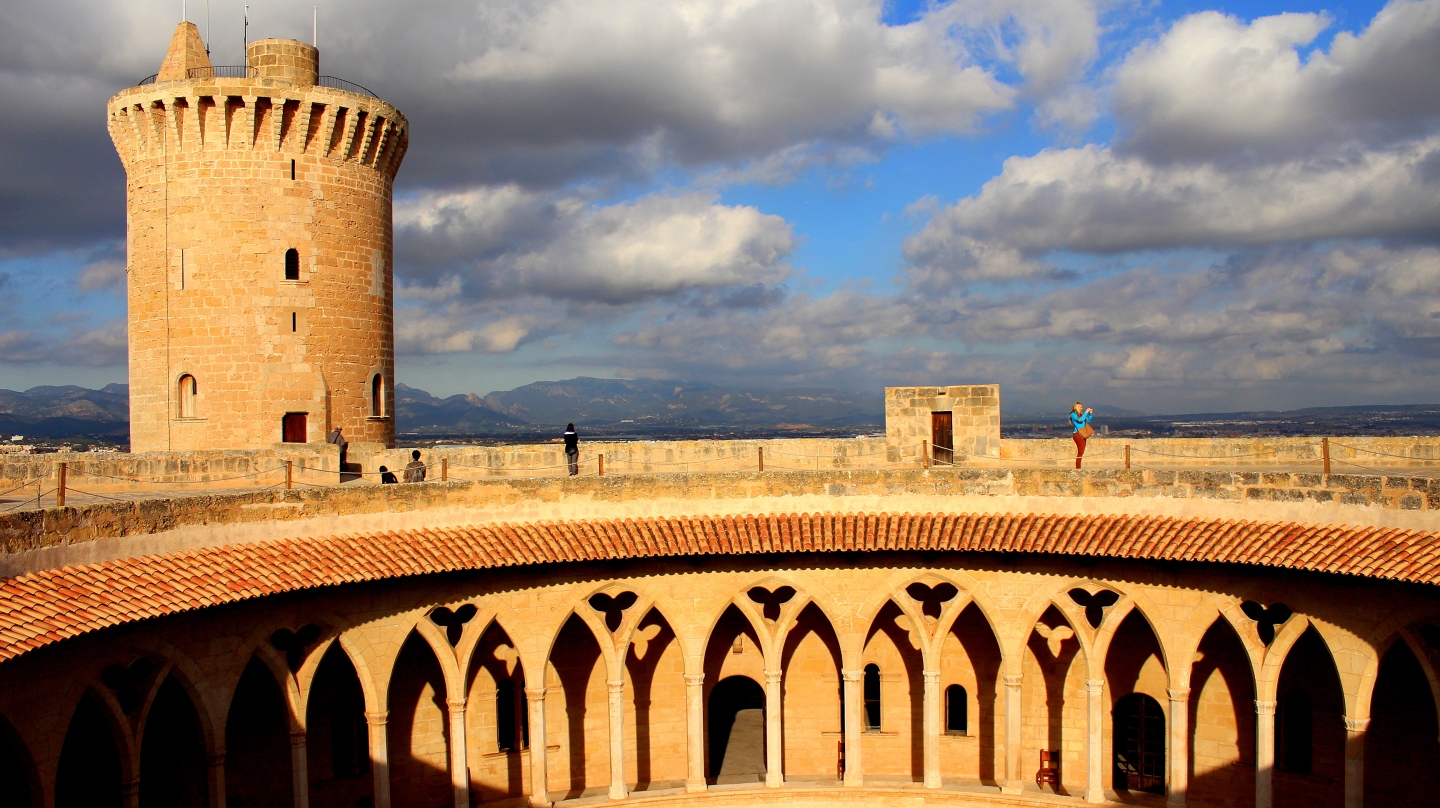 Rooftop of Bellver Castle, the perfect spot to get amazing views over the city of Palma and its bay!

Fancy seeing something unique on your visit to Palma? Have you thought about Bellver Castle, or as the locals call it, Castell de Bellver? Then sorry for the long entry but it is completely worth it as it is one of Palma’s most important monuments!

This is one of the few round-base castles in the whole of Spain and the oldest of its kind in the world. Of pure Mallorcan gothic style, it has been in the perfect setting for over 700 years. If I was a castle, I would have also chosen to be where Bellver is, at the top of a hill at 112 metres which overlooks the whole Bay of Palma. It can’t get better than that!

The castle was built by Jaume II (former King of Mallorca) between 1300 and 1311. It has a circular base and four towers at the four cardinal points, the North one being completely detached from the main body of the castle and separated by the moat. Even if we try to look for examples which might have precedented Bellver Castle, they have not been found, which means it is truly innovative and it was not inspired on any other construction of the time. It was built using a type of sandy rock commonly found in the Balearic Islands (marès), especially those found at the caves under the castle, at the nearby Portals Vells and Santanyí.

After the Kingdom of Mallorca came to an end in 1343 with Jaume III, the castle was no longer used as a Royal residence and was destined to host the island’s authorities. Some centuries later, especially from the Succession War (1700-1715) the castle served as a prison, mainly those with higher social and political influence. Important people such as Melchor Gaspar de Jovellanos, Luis Lacy or François Aragó were imprisoned here. Furthermore, during the Spanish Civil War (1936-1939) Bellver Castle saw how 800 supporters of the legitimate republic were taken prisoners there. In fact, if you visit the castle you will still view graffitis and marks on the rocks made by the prisoners during their time there.

In fact, the road that goes up to the castle was built by the 800 republican prisoners during the Spanish Civil War. A period of Spanish history to be really ashamed of!

The main reason for building the castle was to be able to defend the Kingdom of Mallorca from any attacks coming from the sea or land, this is why it was built at the top of the hill, making use of the great views. It is the perfect example of a fortress-palace, somewhere the Royals could be safe in case of danger.

The interior of the castle, once elegant and grand, hosts today the Museum of the City of Palma, which can be visited during your visit to the castle at no extra cost. Consisting of two levels, it is thought the lower level was used to supply the castle with all its needs, whereas the Royal rooms could be found at the higher level. The indoor patio is completely stunning, It is circular (again) and surrounded by semicircular arches all around, with a well in the centre.

Once the history lesson is over, let’s move on to the interesting stuff. The views. If you visit the castle, make sure you go up to the very top as you can then get, in my opinion, the best views of the whole city of Palma and its bay. I will show you a picture of what they look like in a future post!

I should also mention the forest that surrounds the castle, also known as Bosc de Bellver. It serves as the city’s lung, as it is a huge green area which is ideal for strolls, walking your dog, going for a Sunday picnic or for a quiet reading spot.